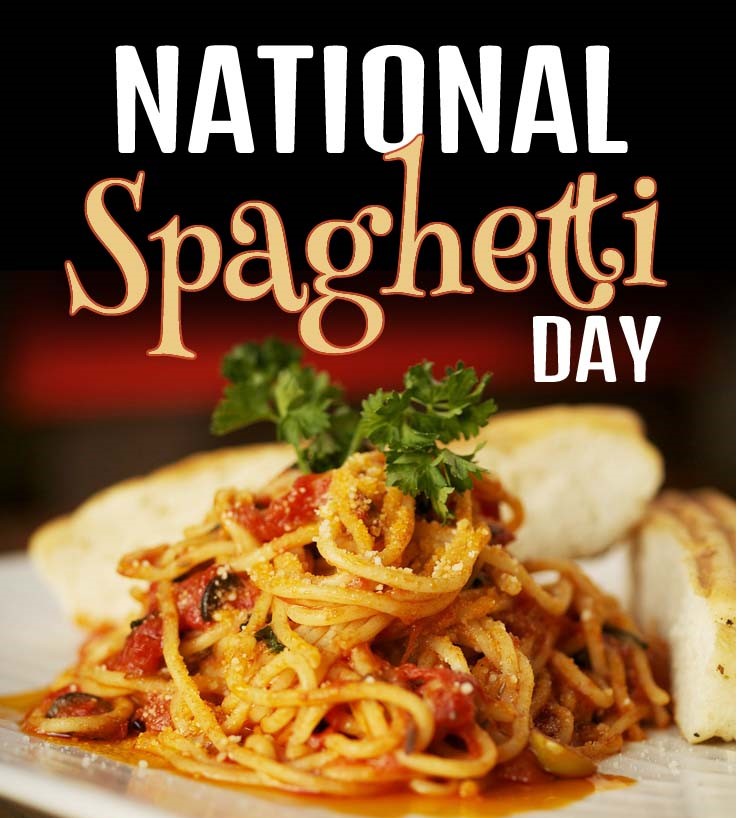 Posted in : Event, Factoids, Food and Dining News, Italian, Music Minute, Weekly Vignette on WCRN 830 AM on January 3, 2020 by : Out With Joe

National Spaghetti Day is an unofficial holiday which falls on January 4th and celebrates the dish that is commonly served with sauce, meat balls and Parmesan cheese. On this day, people all over the world celebrate this dish by feeding their families their favorite version of it. If you’re a fan of this food, then grab a fork and enjoy a steaming plateful of it on this day.

Spaghetti can be traced all the way back to the 1st century, at least the noodles can. It is now believed that pasta was invented in Asia thousands of years ago and made it to Italy during the Arabian conquest of Sicily in the 8th century. Pasta, which means “paste” in Italian, would become a popular commodity among the poor and would be experimented by cooks in Italy for generations. Eventually, it became a dish popular enough for even those in the middle class.The History of Spaghetti

In the 18th century, Thomas Jefferson would popularize macaroni in the U.S. but it was Italian immigrants during the 18th and 19th centuries that brought spaghetti into the U.S.A. Once in the States this dish would continue to evolve. Today, spaghetti is a popular dish in the United States and is enjoyed by millions of people every day.

Unfortunately, while the history is spaghetti is fairly well known, no one really knows when National Spaghetti Day was invented or who invented it. It’s just one of those mysteries that’s unlikely to be solved anytime soon.

Celebrating National Spaghetti Day is pretty easy. All you have to do is get together your friends and family and serve them a nice dish of spaghetti. Or if you’d rather eat alone, then make yourself a nice plate of spaghetti.

While most people think of spaghetti and meatballs covered with a tomato sauce when they think about this dish, there are actually a number of different ways to serve it. You can make a bacon and escarole Spaghetti; a mushroom and radicchio spaghetti; make a Mexican themed spaghetti with corn and chili powder or even make a spaghetti pie.  Why limit yourself to one spaghetti version when there are so many recipes available and they are all just waiting for you to make them on National Spaghetti Day. So pick your favorite and be sure to cook it until it’s “al dente!”